Menu
Donate
עברית
The Miracle of Chanukah and its Message

Chanukah commemorates the events that took place during the Hasmonean rebellion against Antiochus IV Epiphanes, the Seleucid king of Syria, in 164 BCE. In the Al HaNissim prayer inserted in the Shemoneh Esreh and Birkat HaMazon throughout the holiday, we relate: 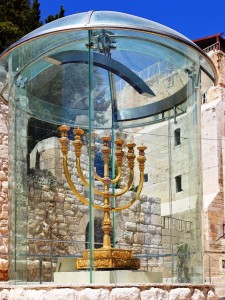 We go on to recount the rededication of the Beit HaMikdash:

“Thereupon, Your children entered the sanctuary of Your abode, cleansed Your Temple, purified Your sanctuary, kindled lights in Your holy courts, and established these eight days of Chanukah in order to give thanks and praises unto Your holy name.”


The Al HaNissim insertion clearly focuses upon the military victory and the subsequent rededication of the Temple.

The battle commemorated by Chanukah, however, was clearly not considered a standard military victory. Interestingly, many quasi-festivals were instituted throughout the Second Temple period, during which it is prohibited to eulogize and fast. Many of these days, as they are recorded in Megillat Taanit, relate to the various victories of the Hasmonians. However, although after the destruction of the Second Temple the days mentioned in the Megillat Taanit are no longer commemorated (“batla megillat taanit”), the holiday of Chanukah, due to the mitzva of “hadlakat neirot” and their importance in publicizing of the miracle, remained intact (Rosh Hashana 18b).

Apparently, since its conception, Chanukah was perceived and treated as no ordinary military victory. Chanukah signified the successful culmination of the Hasmonean revolt, and therefore deserved special celebration. Although the Hasmonean dynasty later tragically strayed from the spiritual legacy of Matityahu, and was in fact eliminated entirely by the time Herod rose to power, the establishment of the dynasty, which began with the Chanukah victory, is nevertheless cause for great celebration. Indeed, Rambam (Hilkhot Megilla VeḤanukka 3:1–3) writes:

In the time of the Second Temple, when the Greeks ruled over Israel, they issued evil decrees against them, banning their religion and forbidding them to study the Law and to fulfill the commandments.…And Israel was in sore straits in consequence thereof and suffered great persecution – until the God of our fathers took pity on them and saved and delivered them from the Greeks.…They set up a king from among the priests and restored Israel’s kingdom for a period of more than two hundred years, until the destruction of the Second Temple.

Some suggest that Rambam’s emphasis upon the two hundred years of Hasmonean autonomy, despite their corrupt reign and tragic end, was intended to note the uniqueness of this victory; it resulted in political autonomy that endured for over two centuries. This message is especially relevant today, as many grapple with their identification with a “secular” State of Israel.

The Talmud, however, focuses on a different aspect of the Hasmonean victory:

What is [the reason for] Chanukah? For our Rabbis taught: On the twenty-fifth of Kislev the days of Chanukah [commence] – eight days during which eulogizing the dead and fasting are forbidden. For when the Greeks entered the Temple, they defiled all the oils therein, and when the Hasmonean dynasty prevailed against them and defeated them, they searched and found only one cruse of oil which lay with the seal of the High Priest, but which contained sufficient oil for only one day’s lighting. Yet, a miracle occurred and they lit [the menorah] with the oil for eight days. The following year, these [days] were designated as a festival, with [the recital of] Hallel and thanksgiving. (Shabbat 21b)

This passage focuses upon a miracle related to the rededication of the Temple, and not on the victory itself. Indeed, the length of the festival, which clearly relates to the miracle of the flask of oil, also attests to the centrality of the post-victory events.

Why is Chanukah Observed for Eight Days and Not Seven?

This centrality is underscored by a comment of Peri Ḥadash, who sought to resolve Beit Yosef’s famous question: why is Chanukah observed for eight days if the flask contained enough oil for one day? The miracle really lasted only seven days, not eight! Peri Ḥadash (Orach Chaim 670) answered that on the first day of Chanukah, we commemorate the miraculous military victory, whereas the subsequent seven days celebrate the miracle of the oil. This answer reflects the perspective that views the events following the victory as the primary cause of our celebration.

Why did the Hasmoneans’ successful efforts to rededicate the Temple after the revolt deserve special celebration? This question is strengthened when we consider that the entire miracle of the flask of oil appears to have been entirely unnecessary. A number of Aḥaronim note that the halakhic principle of “tuma hutra betzibbur” (Yoma 6b), which allows national Temple rituals to be performed even in a state of ritual defilement, should have deemed the miracle superfluous. Defiled oil would also have been suitable for use in kindling the menorah.

To answer this question, Rabbi Michael Rosensweig notes that the Gemara discusses various levels of observance of the mitzva of candle lighting. Unlike other mitzvot, in which higher levels are not expected of everyone, it appears from the Gemara that the optimal level of observance of candle lighting, “mehadrin min hamehadrin,” is expected from everyone; indeed, the universally accepted practice is to adhere to that standard.

Rabbi Rosensweig explains that Antiochus did not wish to annihilate the Jewish people (in contrast to other instances of persecution, such as Haman’s decree). Rather, he wished to reduce their halakhic observance and spiritual expression to a private matter, performed in a “bedi’avad” manner. The Hasmonean revolt rejected this attempt to institutionalize “spiritual mediocrity.”Just as under certain circumstances a Jew’s response to persecution must be “yehareg ve’al yaavor,” to die in affirmation of one’s commitment to Torah, the Jewish people at the time of Chanukah risked their lives to be able to live and practice a complete and optimal spiritual lifestyle.

While the miracle of the flask of oil may, indeed, have been superfluous, relying on leniencies would have undermined the entire message of the revolt. For the same reason, the observance of Chanukah is unique in its focus upon “hiddur;” although one may fulfill the basic mitzva of “ner ish uveito,” one candle per home, he is expected to fulfill the mitzva in its most ambitious and ideal form. In fact, the Shulḥan Arukh does not even mention the possibility of lighting “ner ish uveito!” Thus, Rabbi Rosensweig suggests, the fundamental reason for the revolt, and more importantly, the Jewish people’s response to the miraculous events, were worthy of a permanent celebration.

We should internalize this message, and even while navigating the challenges and complexity of Torah observance in the modern world, especially in the State of Israel, we should aim high, always striving for the deepest, richest, and most ambitious implementation of Torah values.