Rabbi Rafi Ostroff teaches Talmud at the Neveh Channah High School for Girls, in Memory of Anna Ehrman and is chairman of the Gush Etzion Religious Council 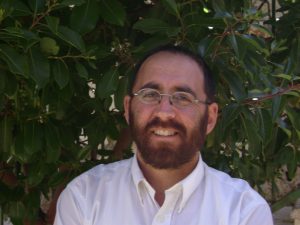 Following a laborious bondage in Egypt, and a challenging journey through the great and fearsome desert, the People of Israel finally near the Promised Land.  However, on the way to the Land of Israel they must pass through the land of Edom; hence Moshe addresses the king of Edom with great courtesy:

“And Moses sent messengers from Kadesh unto the king of Edom: ‘Thus says your brother Israel: You know all the travail that has befallen us.  How our fathers went down into Egypt, and we dwelt in Egypt a long time; and the Egyptians dealt ill with us, and our fathers; and when we cried unto the Lord, He heard our voice, and sent an angel, and brought us forth out of Egypt.  And, behold, we are in Kadesh, a city in the uttermost edge of your border. Let us pass, I pray you, through your land; we will not pass through field, nor through vineyard, neither will we drink of the water of the wells; we will go along the king’s highway, we will not turn aside to the right hand nor to the left, until we have passed your border.’ And Edom said unto him: ‘You shall not pass through me, lest I come out with the sword against you.'” (Bamidbar, 20:14-18)

Moshe turns to the King of Edom and calls him “brother”; but the latter answers with belligerence, and, having no other choice, the Israelites turn back and choose a different route.

“And Israel sent messengers unto Sihon king of the Amorites, saying: ‘Let me pass through your land; we will not turn aside into field, or into vineyard; we will not drink of the water of the wells; we will go by the king’s highway, until we have passed your border.’ And Sihon would not suffer Israel to pass through his border; but Sihon gathered all his people together, and went out against Israel into the wilderness, and came to Jahaz; and he fought against Israel.”  (ibid. 21:21-23)

Once again, the king does not allow the Israelites to pass through his land, despite the Israelites’ promise to do no harm whatsoever.

However, this time round, God gives permission to go out and fight Sihon with the aim of conquering all of his lands to the east of the river Jordan.  And, indeed, the Israelites waged war against them.  In the interim, Moshe and the People of Israel are also compelled to go to war with the Canaanites of Arad (Bamidbar 21:1-3), twice with the Amorites (ibid., verses 13-14 and 32), and finally with Og, king of the Bashan (ibid., verses 33-35).  The next confrontation will be with Balak, Bilam and the Midianites in the following portion.

One should make a mental note of the number of wars in which this “nation of slaves” had to fight in order to ultimately settle in the Promised Land.  Why was there so much opposition to this nation that had left Egypt?

With respect to the seven nations that inhabited the Land of Canaan at the time, it is understandable.  After all, they were residents of the Land and didn’t want the Israelites to conquer them.  And indeed, neither the Torah, nor the Midrash or other sources, have any explicit claims against the seven nations of Canaan, when the latter wage war against the Israelites.

But why are Edom and Sihon so aggressive?  The People of Israel had no intention of going into battle with them, nor did they mean to conquer their lands. Quite the opposite – the Israelites promised to behave impeccably and to cause no harm!

I cannot but compare the entry of the Israelites of yore into the Land of Israel, and our own return to the Land in modern times.  Looking back 75 years, it is almost unimaginable that Holocaust survivors were forced to fight yet another war of survival in the Land of Israel in order to finally find some peace for their aching bodies and souls.

Instead of being given the Land of Israel on a silver platter by the nations of the world, the Jews had to once again fight for their survival.  And who was the enemy they were fighting?  Not only the Arabs who had inhabited the Land of Israel at the time, but nations like Iraq, Syria and Egypt also joined in the war effort, even though none of them had any claim to any part of this land.  In fact, all the Arab nations rushed here with great fervor in the purpose of chasing the remnants of Israel into the sea.

From a perspective of a few decades, such a reality is unfathomable.  It is almost as if there is something Divine, incomprehensible to the human mind, in the relationship that exists between the People of Israel and the nations of the world. Antisemitism seems to be an ingrained tradition which metamorphoses from generation to generation; DNA stamped into humanity; a hereditary disease that is difficult to cure. This ailment keeps taking on new shapes and forms, but it has been around since the days of Pharaoh – “Every son born shall be cast into the river” (Shemot 1:22) – and continues until our own times, where it is incarnated in anti-Israel views and actions by many around the world.

There is no other way to explain the conduct of the supposedly cultured and enlightened English nation, in the years 1945-1948, towards the destitute survivors of the European hell, who had come out from the ashes and had emerged from the devastation, in the hope of establishing a new home in the Land of Israel. How did the British have the audacity to reincarcerate those who had just survived Auschwitz and Majdanek?!

I recall a business trip of mine to Manchester, during which time I arrived in the city by train and then took a cab to my final destination. The driver, an immigrant from Pakistan, chatted with me quite pleasantly during the ride, until the point he asked me where I was from.  I answered simply: Israel. From that moment on, he kept completely silent and I could see the hatred in his eyes.  This story has stayed with me for years because it is so significant. Why would a Pakistani hate an Israeli that much?  He and I were total strangers. Israel has never been at war with them.  We have no conflicts over shared borders or refugees.  Where does this hatred come from?

It is something a Jew could never understand.  I have an aphorism that relates to this: In a place void of logic and sanity – God must be present. In our parsha of Chukat, there are two portions at the beginning that seem to transcend any human logic. The first is the mitzvah of Parah Adumah – the red heifer, of which King Solomon said (Kohelet 7:23): “…I said I will find wisdom, but it was far from me.” (from the midrash in Bamidbar Rabbah 19:3).

The second portion deals with the sin of Moshe.  Why was Moshe’s action so severe that it warranted such an extreme punishment – his not entering the Land of Israel?  The exegetes, in an attempt to make some sense of this obscure episode, cast upon Moshe a myriad of possible sins.

However, one can also simply accept the fact that some things in our parsha are beyond human grasp or logic: parah adumah, the sin of Moshe, as well as Edom and Sihon’s objection to the Israelites passing through their land.  Each of these episodes are unique, of course, but what is common to all is that they don’t seem to be in keeping with human logic. They are beyond our grasp.

It will never be possible for any Jew to wrap his head around the inconceivable and inexplicable hatred that is part and parcel of antisemitism. It began in Egypt, continued when the Israelites entered the Land of Israel for the first time, and did not cease even during the second arrival in the Land, when Jews returned from the exile of Babylon and were immediately confronted by the Samarians.

And it continues to our own times, upon our third return to the Land.

When will this insanity disappear from the world?

Maybe when God reveals His glory and infuses us with His spirit, maybe then it will finally be clear to all that the connection between God Almighty and the People of Israel can never be severed and that it is He that gave us this Land.  This is very much in keeping with what Gilad answers Sihon in the haftarah of this week’s portion (Shoftim 11:24):

“Will you not possess that which Chemosh your god gives you to possess?  So, whomsoever the Lord our God has dispossessed from before us, them will we possess.”