The Holidays are for Everyone During Rosh Hashana and Yom Kippur, tens of thousands of Israelis from Eilat in the south to Katzrin in the north heard shofar and enjoyed meaningful, experiential services that enabled parents to connect their children to their Jewish roots and engaged people of all ages with central Jewish values and … “Joshua and the Power of Collaborative Leadership“

“Joshua and the Power of Collaborative Leadership”

Parshat Vayelech marks the transition from Moshe to his prize student, Yehoshua. They are such different leaders, even though they have similar experiences.

Moshe formalizes a relationship between God and the Jewish People on Mount Sinai; Moshe is alone. (Exodus, Chapters 19-20)

When Yehoshua becomes the leader, God tells him, “Shal na’alcha”, take off one shoe. (Joshua 5:15)

They are different paradigms of leadership.

We live in a world of “Yehoshua”, where we are all leaders in our own lives and in the lives of our families and our communities. It is not about one person, but about the capacity to work together, to engage – like Yehoshua – in a partnership: to cross the body of water together, to tread by wearing one shoe on and one shoe off, to say a prayer such as “Aleinu Le’shabe’ach”, which emphasizes the need for all of us to collaborate.

We’re told in the Gemara:

At first glance, it seems like Moshe is the most powerful leader, while Yehoshua is a minor leader. But there is a different, deeper message here.

When you go out in the sun, all you see is the sun. That was Moshe. All you saw when Moshe led was the fact that he needed to do everything.

But when you go outside at night and you see the moon, you also see all the stars around the moon. Yehoshua’s paradigm of leadership was one in which he collaborated with others to move ideas forward.

As we are in the middle of the high holiday season and we refocus on our lives and what we want to accomplish, let us remember it is the Yehoshua paradigm of leadership that ultimately succeeds in bringing the Jewish People into the Land of Israel. 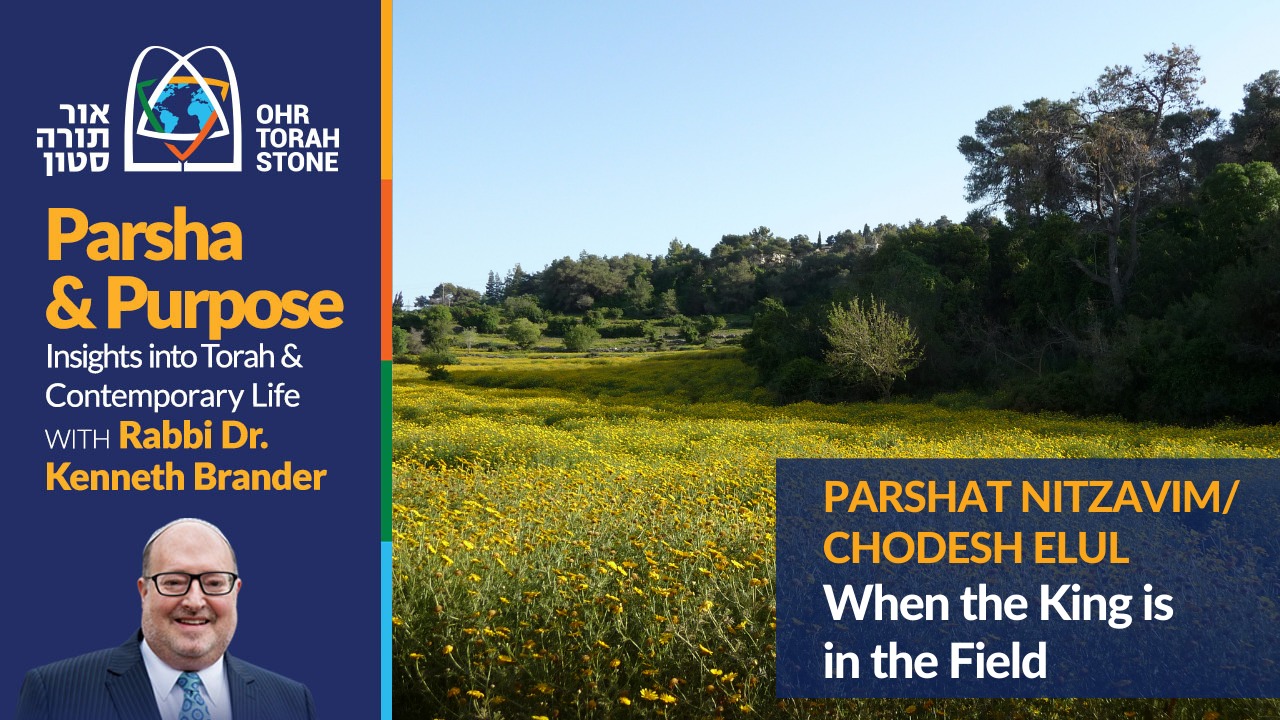 “When the King is in the Field“

“When the King is in the Field“

“HaMelech ba’sadeh” – The King is in the field.

This is the way the Ba’al haTanya describes the essence of the month of Elul. (Rabbi Shneur Zalman of Liady, the first Lubavitcher Rebbe; Likkutei Torah, Parshat Re’eh, 32b)

This is a tremendous difference from the way the Kabbalists discussed this month, which is that Elul is a time of fear.

We should be “kisuiy”: covered, intimidated and concerned.

But the Ba’al haTanya looks at it differently: “HaMelech ba’sadeh”, the King is in the field. To visit a king or a queen – as we’re learning about with Queen Elizabeth in her palace – that’s almost impossible. And when it happens, it’s very formal.

But when the king or the queen is in the “sadeh” – in the field – the informality allows for conversations with the common folk in a totally different way.

Asks the Ba’al haTanya: Do you know what the month of Elul is about? It’s not a month of trepidation or intimidation. It’s a month in which we have the opportunity to focus because God is walking in the fields. God, the King, is walking in the streets.

When we can meet him in the highways and byways of life, we can meet Him on the street, then when we enter His palace during the holidays of Rosh HaShana (when we coronate Him as our King) and Yom HaKippurim, then the relationship is totally different, because the relationship started in a more informal, experiential manner.

May we truly understand this message of the Ba’al haTanya: “HaMelech ba’sadeh”, The King is in the field. He’s looking for us. He wants to engage us.

Let us find the moments to create an informal relationship with God. It will help us on the High Holidays and it will help us for the rest of our life. “Inspiration, Empowerment and a Stolen Shofar“

“Inspiration, Empowerment and a Stolen Shofar”

We find ourselves right before Rosh Hashana, and there is a very interesting halakha regarding the shofar:

Normally, we do not allow the use of a stolen object to fulfill a mitzvah. Nevertheless, if you steal a shofar and you hear that sound, it’s obviously not the best sound that you can hear on Rosh Hashana – no one wants to hear a sound on Rosh Hashana from a stolen shofar – but if that’s the sound that I hear, I still fulfill my obligation. (Shulchan Aruch, Orach Chayyim 586:2)

Why is this? Because of the halakhic principle of

There is no such thing as stealing a sound. (Maimonides, Laws of Shofar, Sukkah and Lulav 1:3)

Yet there is another interesting halakha that states:

If I’m walking by a person’s yard or a person’s home, and a person is practicing the Shofar on Rosh Hashana, and I hear 100 blasts from his practicing, I do not fulfill my obligation. (Shulchan Aruch, Orach Chayyim 589:8)

Why is it that I can fulfill the mitzvah of hearing the sound of the shofar blasts via a stolen shofar, but not if I hear a person practicing with a pristine shofar on Rosh Hashana?

I believe that the underlying message is that Rosh Hashana is the beginning of the process of re-engaging with God.

We are trying to find our own sound, and there will always be something that is not perfect about our sound when we begin to create a relationship with God.

It will never be fully authentic.

Every one of us on Rosh Hashana is not fully engaged yet – it’s the beginning of the process.

As much as we try, and as hard as we work beforehand, a stolen sound still works, because all of us – even with the most pristine shofar – have a little bit of a stolen sound in our psyche, in our essence, we’re just not there yet.

But we have to try. We have to work hard. Therefore, we cannot fulfill the mitzvah via a shofar sounded not in order to inspire and empower us, but rather sounded for practice, because it must be a shofar sound intended to inspire the people around him.

It must be a shofar sound committed to trying to make a difference.

As we begin the process of Rosh Hashana, let us work to realize that it is okay if our spiritual sound is not completely authentic. Bringing the Holidays to the People From Rosh Hashana through Sukkot, as Jews of all backgrounds seek meaning and opportunities to connect, the Jewish cultural coordinators of OTS’s Yachad Program for Jewish Identity run a range of inviting events which attract tens of thousands of people of all ages. “A secular couple came to hear … The Emotional Pull of the Shofar Rabbi Nir and Andy Koren are shlichim of the Straus-Amiel Emissary Training Institute serving as Rabbi and Rebbetzin of the Jewish community in Quito, Ecuador At the climax of Yom Kippur, right after the solemn Tekia Gedola (the long shofar blast), a woman from our community who defines herself as someone who … Yachad: Connecting Jews to the High Holidays, their Heritage and Each Other The High Holidays are a time when Jews of all backgrounds seek meaning and opportunities to connect – even Israelis who identify as secular or who may feel alienated from synagogues and Jewish institutions they view as “religious.”  During this uniquely reflective time …

Israelis Prepare to Celebrate the Year’s Holiest Days Under Lockdown As the pandemic in the country worsens, officials warn that new restrictions might not be enough to cut infection rates significantly. Many people question the logic and motives behind the rules. By Isabel Kershner | Sept. 18, 2020 JERUSALEM — As Israelis prepare to celebrate … 145,000 Israelis Embrace New Year with Joy, Meaning and Unity OTS’s Yachad Program for Jewish Identity brought the beauty of Rosh Hashana, Yom Kippur, Sukkot and Simchat Torah to more than 145,000 Israelis this year through their annual “Holidays are for Everyone” initiative, designed to ensure that Jewish traditions are accessible and meaningful for all …