Another difficult case of get-refusal came to an end on Thursday (September 1) as J, a resident of France represented by Yad L’isha: the Monica Dennis Goldberg Legal Aid Center and Hotline, finally received the get that her husband had deposited with a well-known rabbi in France 12 long years ago.

The story began in 2004, when the couple separated.  As part of the separation agreement, the husband placed a get in the hands of a well-known rabbi from the French Jewish community. However, when the split was finalized and J turned to the rabbi for her get, he refused to give it to her. Why? The rabbi claimed that by she had earned the status of “moser” [a Jew who informs on another Jew and collaborates with non-Jewish authorities] by turning to the French civil courts in matters relating to the division of the couple’s joint property, and must therefore pay him a “penalty” if she wanted to receive her divorce. 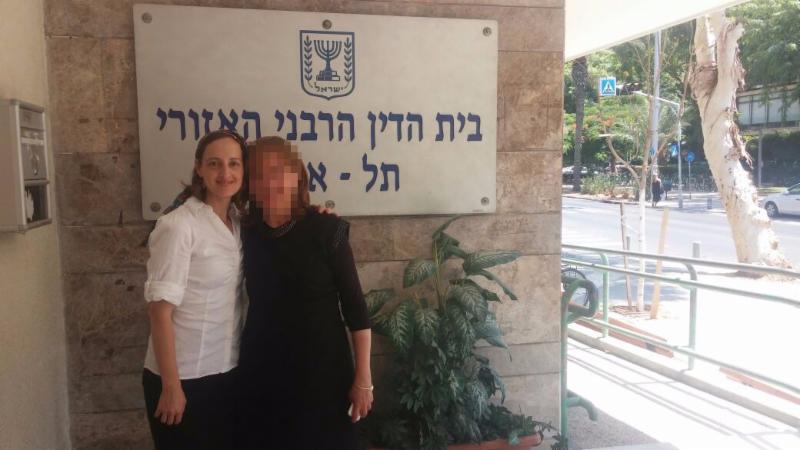 J thus found herself chained to a marriage in which, on the one hand, the rabbi refused to present her with the writ of divorce which had been deposited in his hands, and on the other hand, her husband refused to participate in a divorce ceremony elsewhere because he claimed that he had already fulfilled his obligation.

To add insult to injury, over the years, this same rabbi officiated at not one, but two of the husband’s other marriages and not one, but two of his divorces! It should be noted that the rabbi has acknowledged all of these facts to be true, while continuing to enchain J.

About a year ago, J turned to Yad L’isha, and staff advocate Tamar Oderberg applied for a divorce in the Israeli rabbinical courts in her name. When Yad L’isha learned that J’s husband would be coming to Israel in the wake of his mother’s funeral, they placed a stop-exit order on him to prevent him from leaving, with the condition that it would only be lifted if he gave J a get. J was summoned immediately to Israel, her husband was brought before the court, and long-awaited freedom was finally delivered into her outstretched hands.

“This case is just another example of the unfathomable situations we deal with, in which women are prevented from realizing their right to live a free life,” says Pnina Omer, director of Yad L’isha. “As if there weren’t enough cases of men who refuse to release their wife from the bonds of marriage, we are often witness to cases in which external parties increase the suffering of women by supporting the get-refusal. In this specific case, this was done by none other than a rabbi.

“We call on the rabbinical courts to deal with rabbis such as these with a heavy hand and treat them as partners in a crime.  We ask the courts to make an example of this particular rabbi, so that others will be deterred from acting likewise.”