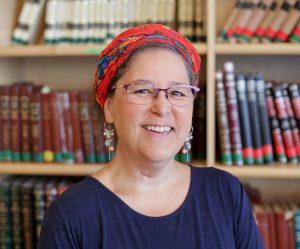 Before making history as the first female chaplain at Bar Ilan University, Rabbanit Devorah Evron had made a name for herself as an Orthodox, feminist scholar and director of the Women’s Institute of Halakhic Leadership at Ohr Torah Stone.

Evron, who was born in the States but moved to Israel with her family as a child, has been involved in Jewish feminism, and specifically religious Jewish feminism, for many years. But it was during her time serving as the head of the Elga Stulman Women’s Institute, a pluralistic Jewish women’s institute, that she realized she wanted to take her expertise to the next level. “In order to really make a change, I realized I needed to fulfill something I’d wanted to do since I was a child,” Evron explained over the phone. “I wanted to study advanced Jewish and halakhic studies.”

So Evron studied for six years at Beit Morasha in Jerusalem, completing the same training that men undergo in order to become rabbis. A few years after graduating, she began her work at Ohr Torah Stone, and a few years after that was approached about the position at Bar Ilan. Though the new role involved travel from her home in the North, “I thought it was important enough to do it,” she said.

We spoke to Evron, who will be speaking at the Z3 Project conference, about her groundbreaking role and what her response would be to anyone who argues against women-inclusive halakha.

This interview has been edited for clarity and length.

A feminist Torah voice has three different faces to it. First, a feminist critique of halakha as it’s known, and more importantly, a feminist critique of the practice of halakha and the halakhic community. For example, we’ll have Hanukkah next week. And according to the Orthodox halakha and the Talmud, women are obligated to light the candles just like men. According to halakha, when men and women are both obligated to do the same thing, then a woman can light the candle for everyone. But if you look at Orthodox communities and events, you’ll see that men are invited to light the candles even though women can do it as well. The feminist critique is how do I understand it that even though men and women are equal according to halakha in most aspects actually, in the public sphere we only see and hear men?

Second, there are questions that are being asked now about feminist development. Women have already gained their voices in places of work or at home, and they want to hear their voice in the religious and communal space too. So we will see questions that arise from that process. For example, some women want to say one of the brachot under the chuppah. They’ll ask if this is possible, and if not then why, and what would be the circumstances in which they would be able to do that? Or women saying Kaddish, as well. There are many more examples.

Third, we have women who can actually answer the halakhic questions. How does that influence if we see a change or a shift in priorities in the answers we hear?

You have said in interviews that women have been excluded from halakhic discourse because of historical and educational processes – it’s not that they’re halachically forbidden. What would you say to someone who argues that women are not included for halachic reasons?

That they have to prove it. Because I have the sources to show that answer would be wrong. So they’d have to prove their statement.

Are there communities where the traditions are too firmly in place and there isn’t the open mindedness to look at the halakha from a new point of view? In other words, where tradition has taken the place of halakha?

What we hear more is, “we know that halachically this is okay. But for social reasons, we do not want to change anything.” We hear that quite a lot. People saying, “We don’t want to rock the boat. Everything’s good, why do we need to change?”

Who or what inspired your feminism?

I always felt that I have the right to be heard. Probably because that’s the way my parents raised us. Even though I don’t think they would have called it feminism, but they they raised us to be responsible. And because we are responsible, then we should be heard. Authority and responsibility go together. So that’s how I was raised. I think the word “feminism” is something that did start at a relatively early age. In high school, I read things, and then I knew I was a feminist. It was pretty early on.

You’ve also been a proponent of gender equality in the IDF. What do you think would change, in your community and broader Israeli society, if women had the same opportunities as men?

I think it’s a question of sitting at the table. The United Nations passed a resolution years ago that women should be part of decision making, including in things that are traditionally considered male, like security. Women, because of how we are raised, bring different points of view. Diversity in general is very important, not just women’s points of view. Diversity is also proven to be beneficial. Places of work want to be diverse because research shows that it will increase their revenue. It’s important.

There is a massive polarization between religious and secular Jews in Israel. Do you see any possibility of that changing? Do you believe that your work could help bridge that divide?

Definitely. I am also a graduate of the first cohort of Israeli Rabbanut, a program between the Hartman Institute and the Midrasha Ha’Oramim. It’s a program that brings together rabbis from most parts of Israeli society – we only have one ultra-orthodox participant. I believe that that discussion can move things forward. Now again, it’s a question of responsibility. Do we feel responsible not only towards the community and the people that live generally the same Jewish life as we do? Or do I feel responsible – not meaning I’m in charge of, but meaning I have a responsibility towards – the entire society and Israel? If I do, then I think I have to do something about it.

What perspective are you bringing to the Z3 conference on Israel and the diaspora?

What I’m bringing is the perspective of what Judaism means and looks like to Orthodox or modern Orthodox Jews in Israel today. In many ways, it is different from what many American progressive Jews think. And then also the question, what do Israelis expect of people in the diaspora and in the United States? What kind of conversations do they want to have? Is that something that we can have? What are the difficulties?

What are the conversations that need to be happening that are not happening?

I also don’t know how much Americans are aware of the things that really concern Israelis in everyday life. What do Israelis go to vote on? It seems that many Americans think that Israelis should vote on issues of religion and state. Most Israelis are not concerned with that and don’t vote on that. That would be something that would be interesting to talk about; to understand why it is that church and state is not in the top three issues Israelis vote on. These are issues that would be interesting to discuss.

Read this article on the Jewish Telegraphic Agency website